Football Fan Cast is reader-supported. When you buy through links on our site, we may earn an affiliate commission.
7/9/2020 | 03:48pm

Premier League clubs have begun unveiling their brand new kits before the start of the 2020/21 season.

Aston Villa have kept Kappa as the club’s official kit supplier and once again the Italian sportswear brand have not disappointed with a traditional twist to the Aston Villa home and away shirts.

Dean Smith’s side secured Premier League survival on the final day of the season last term thanks to a goal from club captain Jack Grealish.

And Villa will be expected to push on to bigger and better things but that largely depends on whether or not Grealish will stay at his boyhood club.

Fans do not want to miss out on buying these Aston Villa football shirts before it becomes too late to buy them.

Both shorts share the same design with different colours, while the socks also bear a similar pattern, although the away socks show some extra detailing on the calves.

You can never go wrong with claret and blue. Kappa have paid tribute to the traditional kits of the past while adding a little bit extra as well.

The kit manufacturers have managed to get away with a subtle pinstripe pattern to add a personal touch and pull everything together. 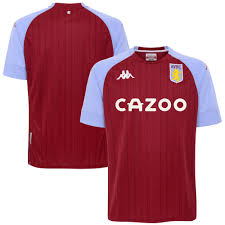 Show your support wherever you go with this Villa home shirt for the new season.

Cazoo have become the official shirt sponsors which means the club can finally get rid of last season’s ugly ‘W88’ logo. And about time too.

Although some may claim Villa are simply copying Everton, Kappa have done a great job of giving the Lions a new look.

Our only quibble is that the logos and club crest are far too high for our liking. Other than that, not bad, not bad at all.

In fact Villa fans should also pay particular attention to the highly-detailed badge. Kappa have pulled this one out of the bag.

Kappa have kept the away shirt as close to the home shirt as they possibly can which makes perfect sense as if it ain’t broke, don’t fix it.

However the Villa away shirt has changed a couple of minor details from its counterpart (besides the colour). 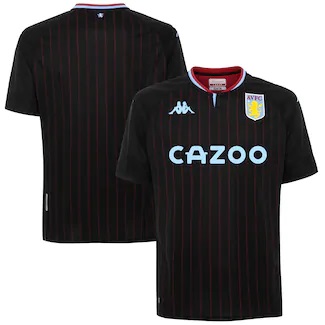 Wear your passion for the Villans with pride with the brand new away shirt!

As away shirts go this is one of the best we have seen in a while.

The dark red stripes work so well with the stylish black background which is bordered by the round open white and red collar of the away jersey. Much better than the black, green and red mess they made last term.

Kappa have even added the snazzy silicone crest that has caught everyone’s attention to the front of the shirt.

The kit manufacturers completed the away strip with matching black shorts and socks with light blue detailing.

If you aren’t interested in either of these kits, make sure to check out our list of the Top 5 Gifts To Buy Aston Villa Fans This Year!