Football Fan Cast is reader-supported. When you buy through links on our site, we may earn an affiliate commission.
25/8/2020 | 01:04pm

There are not many ways of expressing your love for your football club better than decorating your room with the best football wall stickers.

Whether it’s a clock, duvet set or a poster, you simply have to try and get some bit of merchandise or souvenir in your room – that’s if your other half or guardian allows it!

In 2020, the Premier League has never had a bigger global impact, meaning that every club is looking to cash in and commercialise on their products, leaving a huge variety of things on offer.

One great way to spruce up your bedroom is by getting some football wall stickers. Not only do they represent your love for your football club, but there are also many different and customisable wall stickers.

Like the sound of that? Well, if you support a Premier League team we’ve cut out some of the graft for you and have suggested our favourite football wall sticker on the market for each club.

We’ll start with something simple with Arsenal’s personalised wall sticker.

The large Arsenal badge is big enough to let everyone know your true colours, while the stickers below with the name make it so you are in no doubt as to whose room it is.

While it’s not the most inventive out of all the football wall stickers, the fact that it is customisable makes it that much better.

This is one for someone who sits in the Holte End.

This Villa wall sticker and decal features the famous ‘Yippi aye eh’ chant alongside the club’s badge and is available for £20 on eBay.

If you’re a passionate Villa fan who loves that chant, then this could be a match made in heaven.

This official Brighton and Hove Albion wall sticker is available on Amazon. 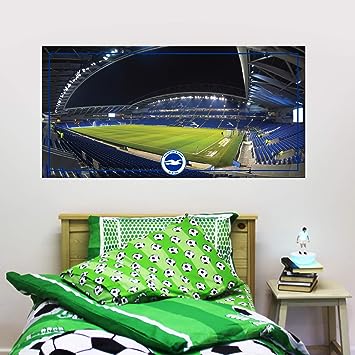 While it’s a bit more simplistic and less personalised than the others, it still has a great picture of the Amex Stadium, which might be enough for Albion fans considering that it was only opened in 2011.

There’s no doubt that the stadium is a piece of art – so why not let it be the focal point of your bedroom?

This Turf Moor full wall mural is strictly for the biggest of Burnley fans. 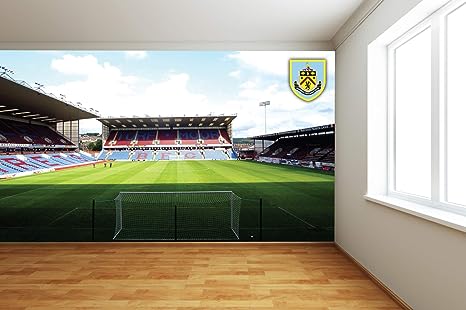 Being sold by The Beautiful Game, this mural is one which would cover the entire side of one wall, meaning that whole chunk of a bedroom would be taken up by the backdrop of Turf Moor.

Definitely one which is likely to impress any Burnley fan.

While these wall stickers might not be as vast as the other suggestions, this sticker set on Amazon is not only great value for money, but it also has much variety. 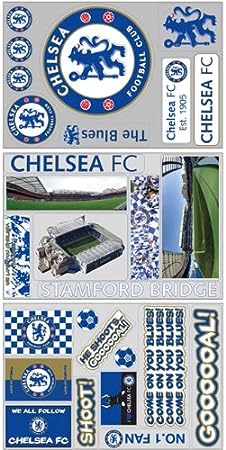 Share the joy, frustration and passion that is part and parcel of being a true Blue with this vinyl poster!

This will mean that the owner would be able to get creative with all of the stickers at their disposal, with some being of Stamford Bridge, and others being famous chants.

Yes, perhaps a bit similar to Villa’s suggestion – but definitely one Palace fans will be able to get behind.

Like Villa’s, this again includes the club’s crest as well as lyrics from a popular song of theirs, in this case, the club’s goal and entrance music, Glad All Over by Dave Clarke Five.

Crystal Palace Crest and 'Glad All Over' Song Wall Sticker

With this being such an iconic song for the Eagles - just watch Ian Wright, Alan Pardew, Nigel Martyn and co sing it out before the 1990 FA Cup final - this would great for someone who loves to hear that song.

Furthermore, the red and blue colouring of the letters look really smart, so it gets a big thumbs up from us.

Looking for a bit more of an edgy look? If so, this Goodison Park wall sticker could be the one for you. It could be a small price to pay to finish off your dream bedroom.

The wall decal is 180cm x 90cm long, meaning that it wouldn’t be the centrepiece in the room, which could be more suited to someone who is not after something overpowering.

The Beautiful Game has a perfect decal set for any Fulham fan who is in love with the Craven Cottage Stadium and wants some personalisation as well.

Perfect for the bedroom, playroom, home or office, this graphic can be easily removed when you no longer require it.

This would be perfect for a young supporter who has aspirations of playing on the hallowed turf.

Missing Elland Road in the flesh? What better way to make yourself feel like home than putting up a big vinyl sticker of the ground in your bedroom of the stadium?

This really is an excellent feature to add to your home as it is suitable for use on most smooth surfaces.

Who else could you possibly want filling up your wall other than Jamie Vardy?

You can find the wall decal on Amazon. With the sticker showing Vardy wheeling off in jubilation after a goal, you can’t go wrong with waking up to that face every morning.

This one is pretty simple and boastful – the perfect kind of sticker to put up as soon as your team wins the league for the first time in 30 years.

Also, with the way that Liverpool are going at the moment, the chances are that you won’t have to take it down any time soon!

Another one from The Beautiful Game with a big old player decal in the face of Kevin De Bruyne and Sergio Aguero.

This wall sticker set is accompanied by two other wall stickers in a Manchester City Football poster as well as the badge.

This vinyl sticker wall decal would be a fantastic addition for any die-hard red, with it featuring Alex Ferguson with a very slick design. 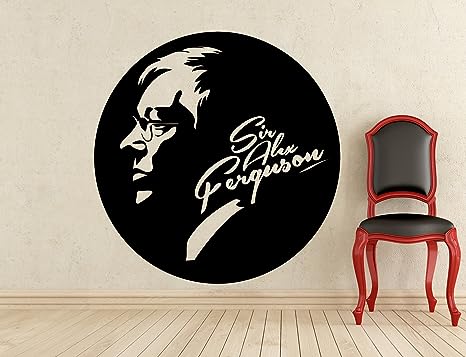 The black and white design has Sir Alex Ferguson’s name blended with a picture of himself managing and would look very stylish in a bedroom.

While players and managers may come and go and therefore be a bit of a risky purchase as a wall sticker, Fergie simply will never be forgotten as a Manchester United legend.

Another sticker with a club song on it – this time it’s the Blaydon Races and Newcastle United. 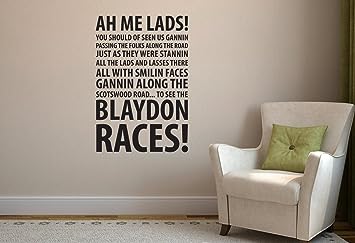 Another banger from The Beautiful Game, this wall sticker has the lyrics to Blaydon Races from the start of ‘Ah me lads!’

This is the kind of wall decal which would be perfect for a die-hard fan who is a big fan of the chant; having this sticker would be a great sign of a true United fan.

Sheffield United fans are proud of their roots. The two blades are iconic to the club from the steel city, so what better way to decorate your bedroom than with this stylish wall sticker.

It features the club’s crest with the line ‘forged in steel’ below, surrounded by a really creative and aesthetically pleasing pattern of black and white shards.

Out of all of the options on this list, it might not be the funniest or most expressive, but it has a great shout of simply looking the best. It’s available from Amazon.

Kind of similar to the Norwich suggestion, this wall sticker is an image of the ground (St. Mary’s), but instead of it looking like the wall breaking through, there are windows being opened.

An ultra thin, high definition vinyl of the best quality featuring the best stadium in the South Coast!

It’s got a great view of St. Mary’s, and also, there aren’t many other options available for on the web for Saints fans. Unlucky guys. 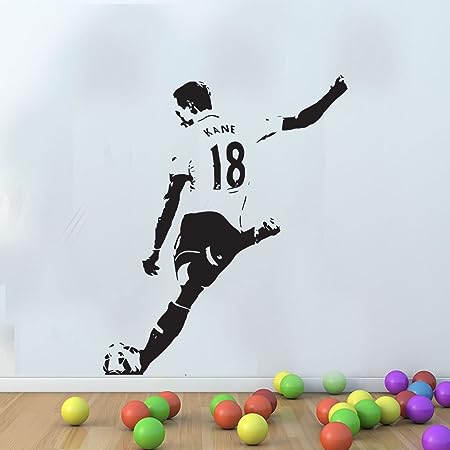 One of the best strikers in the world, Kane finished as the top goalscorer at the 2018 World Cup, winning the Golden Boot. Any Spurs fan would be lucky to have him on their wall!

Available on Amazon, this could be a bargain if you’re a big Spurs fan looking to give your room a revamp.

The anthem plays a crucial part in every Albion fan’s life as it is sung after every goal at The Hawthorns. 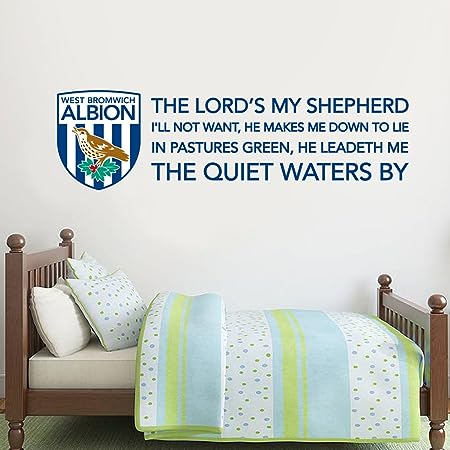 Hanging it on your wall means you will never miss a beat!

Everybody joins in with the hymn no matter their background and it is the perfect gift for Baggies of all ages!

This broken wall mural decal is a great fit for any fan who has been missing the ground recently. 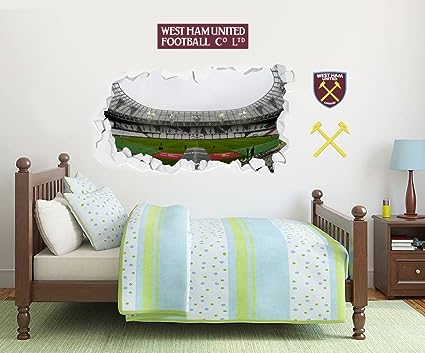 The picture shows the view of the London Stadium from the tunnel, from which you can see the two hammers crossed over from the design in the seats in the crowd.

It’s a really good picture and would look great for any young West Ham fan hoping to one day walk out on that hallowed turf.

There are plenty of Wolves players at the moment who are of top quality, so having to pick a favourite must be pretty hard.

This sticker shows a picture of Nuno Espirito Santo’s side celebrating their promotion to the Premier League at the end of his first season in charge of the Molineux Stadium and is also accompanied by a Wolves badge.

If you didn’t find what you were looking for, why not try the Premier League fan gifts page for more ideas!