Football Fan Cast is reader-supported. When you buy through links on our site, we may earn an affiliate commission.
28/8/2020 | 03:38pm

You are never too young to be a Liverpool FC fan. In fact, we think that age is just a number and baby football kits are too adorable to ignore anyway.

However, picking the perfect present for a newborn child can be quite a challenge as there is so much out there on the market.

Here at Football Fan Gifts, we have assembled a list of the best baby kits available to buy from online stores. So, if you are ready to raise your child as a Red, then look no further!

Featuring home and away kits, get ready-printed or personalised designs for your kids, so they can show their support for their favourite club with a range of replica football shirts, shorts, socks and more for infants!

What better way to commemorate that famous campaign by wearing this iconic sleepsuit? Inspired by the same shirt, shorts and socks worn by players on matchdays at Anfield, this is the best loungewear to buy for little Reds.

The defending champions are gearing up to go again when the new season starts in September. Check out the brand new baby home kit and pick up the perfect gift for the new arrival.

Nike have taken over from New Balance and dropped one of the best strips in recent memory. Liverpool’s home kit is comprised of the classic red shirt, shorts and socks with a white and teal trim – do not miss out.

Champions League winners Liverpool were looking to make a point, and boy, they did not disappoint. Klopp’s side went on another record-breaking run, accumulating the most wins in a row, the biggest lead at the top, the best start to a season, and the earliest title win as well – to name just a few! 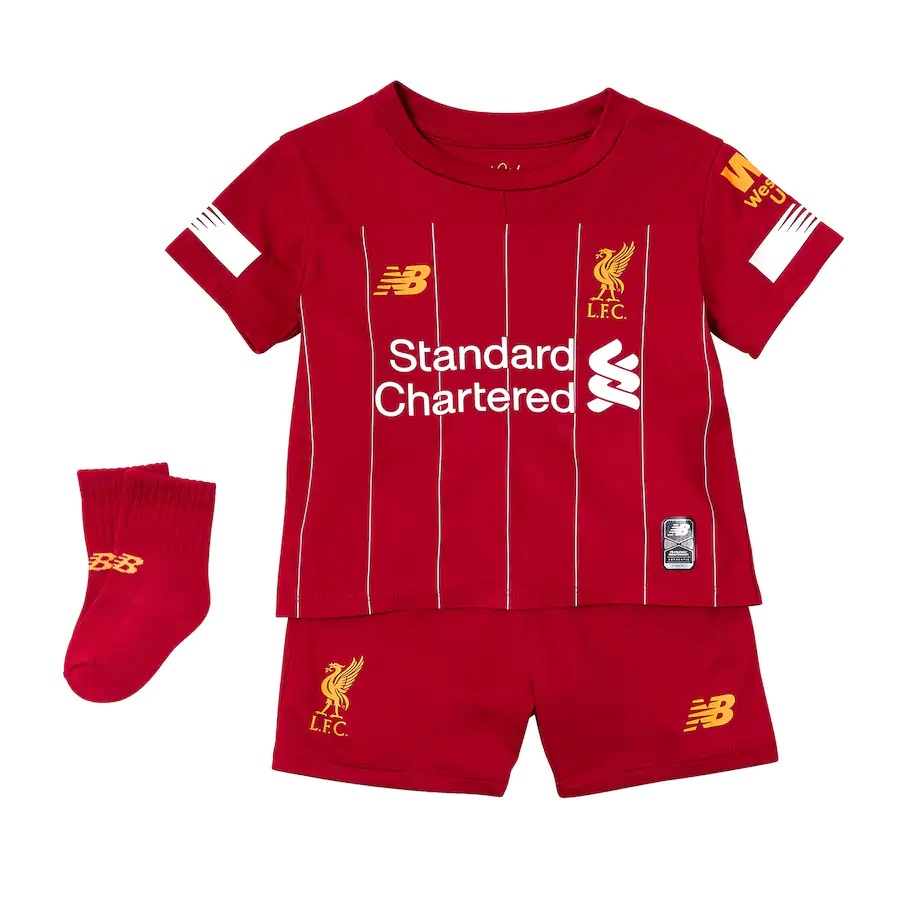 Show where your loyalties lie with this mini kit emblazoned with the iconic liver bird crest!

Available from Kitbag for a reduced price, this kit for the tiny tots is surely an absolute bargain.

Kit your kid out in fluorescent bold and bright colours with the name of their favourite player on the back of the shirt. This strip is the stuff of future champions! 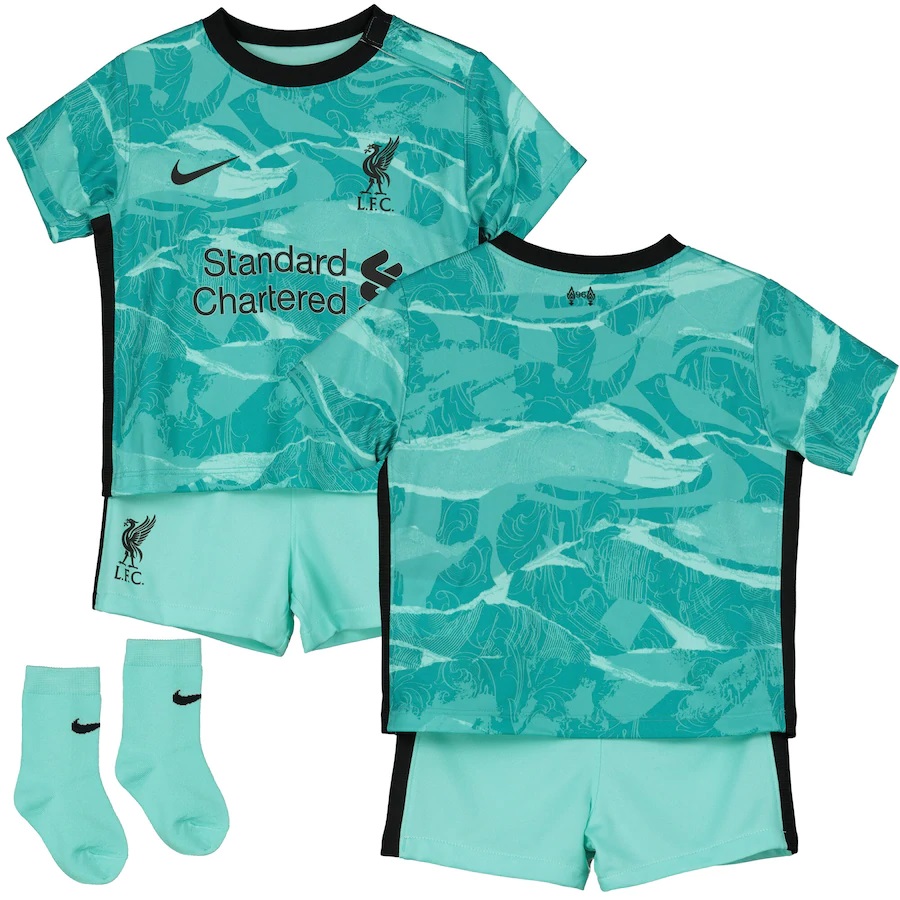 Give your child the best start in life with this iconic look!

After arriving at Anfield from Hull City in 2017, Andy Robertson has become an integral part of Klopp’s side ever since. Make them feel like they are a part of the team with this replica mini kit!

Your child will never walk alone wearing one of these adorable bodysuits. 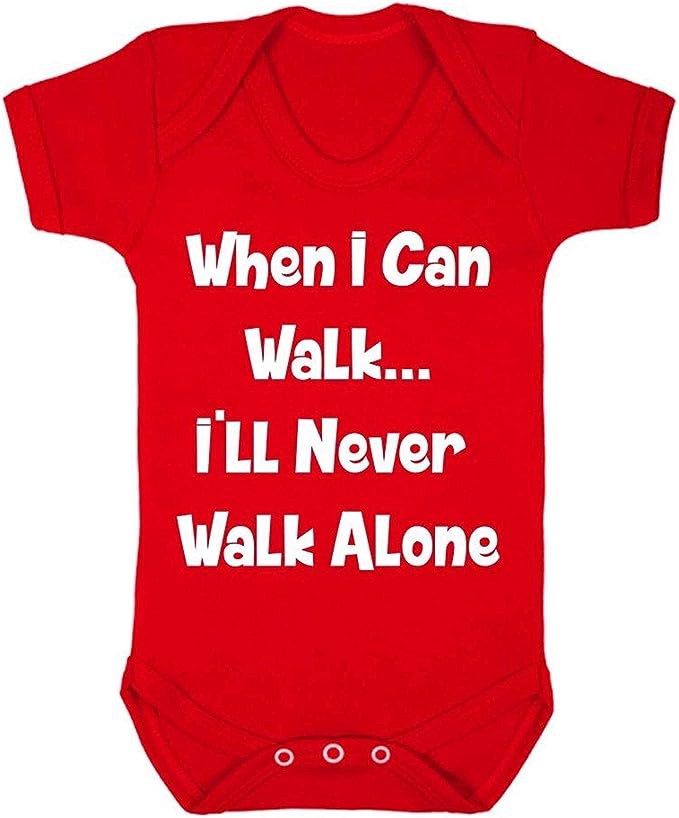 Show your support for your favourite club with this snug bodysuit showing the famous slogan!

Help them stand out from the crowd with this professionally printed babygrow.

The last in the long line of Liverpool kits made by New Balance, it’s engineered with a special type of technology to help your child stay cool, dry and comfortable.

If this isn’t enough to persuade you, there is a Bob Paisley signature on the inside of the collar. What more could you want?

Alisson, who is arguably the best goalkeeper in the world, played a crucial role in Liverpool’s title-winning effort, ending the club’s 30-year top flight title drought as a result. 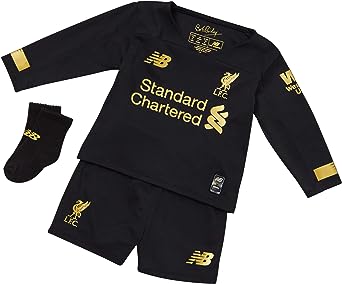 Give your child the right start in life with this goalkeeper strip!

Finders keepers, losers weepers – your child will not want to miss out! The club have done a fantastic job of recreating his kit right down to the finer details.

Daniel Sturridge, Roberto Firmino and Sadio Mane scored 39 goals between them during the 2016/17 Premier League campaign to celebrate the club’s 125th anniversary.

You can customise this strip with the name and number of your favourite player from that season like Sturridge or even their own name to add that personal touch.

Again, giving your child this iconic away kit is another great way to celebrate the 2019/20 campaign. Liverpool claimed several major scalps on the road including Chelsea, Wolves and Newcastle United on the final day of the season.

Trent Alexander-Arnold was among the scorers during the 4-0 thrashing of the Foxes at the King Power Stadium wearing this away kit last year. Buy this beautiful strip before it’s too late!

With the orange logos on a bright purple background, this vibrant away kit is one of the best baby kits in the collection. 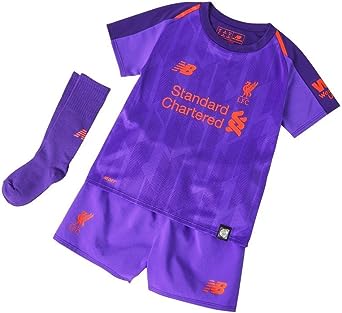 Dress your child in this awesome mini shirt with matching shorts!

One thing is for sure, parents will not want to miss out this one.

The Reds got their revenge on Real Madrid by beating Tottenham Hotspur in the Champions League final in the Spanish capital to rub salt in the wound. 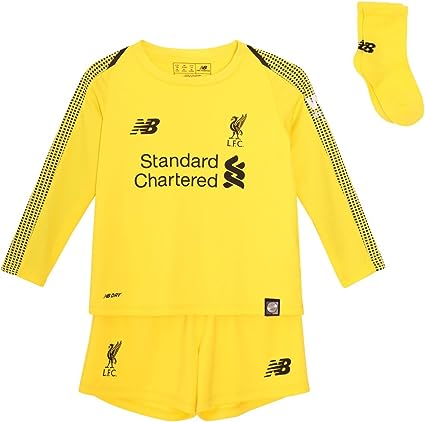 Keep your baby nice and warm in the winter with this fabulous long-sleeved top!

Spurs had several chances but were denied by Alisson who put in an impressive performance between the posts to save efforts from Christian Eriksen, Lucas Moura and Son Heung-min.

Salute his incredible efforts by kitting your kid out in the iconic strip.

On the other hand, the least said about Loris Karius, the better, but there is no denying the fact that this unisex replica kit is a thing of beauty. The green just works so well with the white logos and patterns on the sleeves. 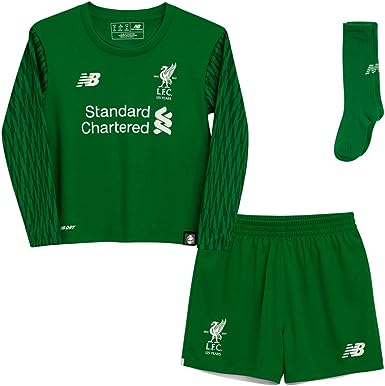 Kit your kid out in this infant goalkeeper kit to celebrate 125 years of football at Anfield.

Let everyone know where their loyalties lie with this throwback to a time where the club struggled to win silverware.

Still stressed about finding Liverpool baby gifts? Well, you don’t need to worry any more! Mo Salah can’t seem to stop scoring in a home jersey. Upon his return to the Premier League he scored the most goals in a debut season for the club, before becoming the fastest player to score 50 goals for the Reds one year later. 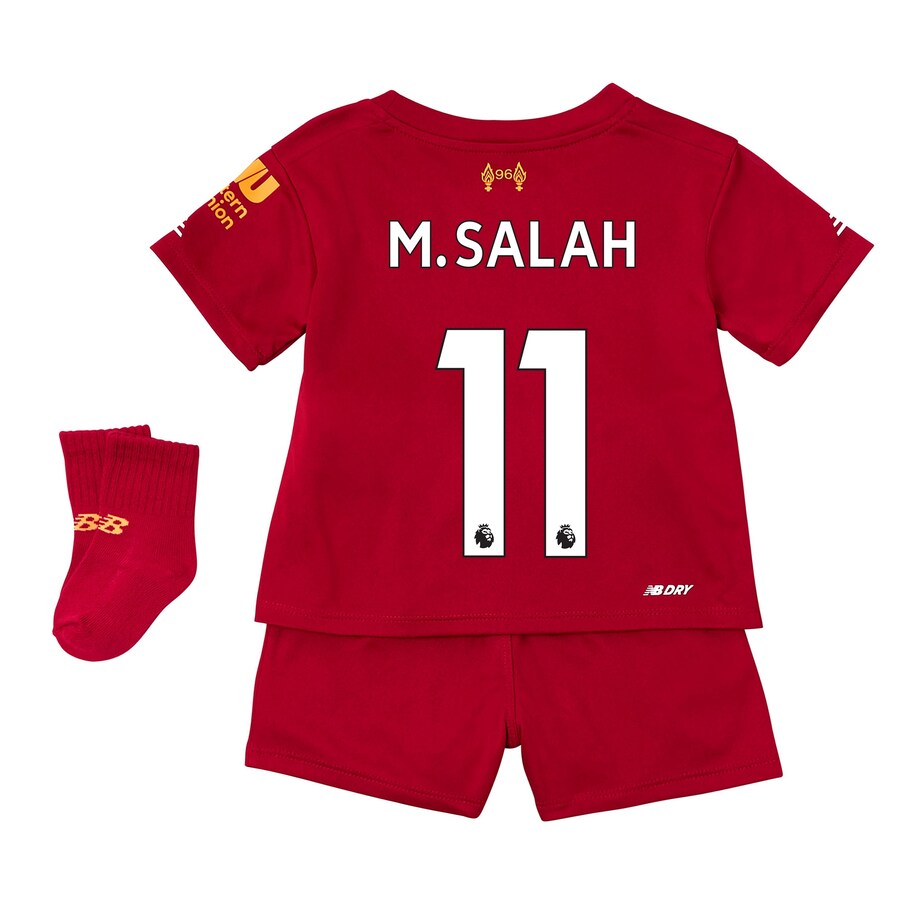 Ensure your baby becomes a true Red wearing the name of everyone's favourite Egyptian on the back of their top!

He has also scored against the most teams in a single season, a record he shares with former Arsenal strikers Ian Wright and Robin van Persie.

Show your support for one of the greatest forwards to play for the club in recent memory by buying your newborn child this personalised shirt and shorts.

Jordan Henderson has been criticised for much of his career but shrugged off all the doubters to lead Jurgen Klopp’s men to immortality in the Champions League two years ago. He surpassed such a feat again by lifting the Premier League trophy last season. 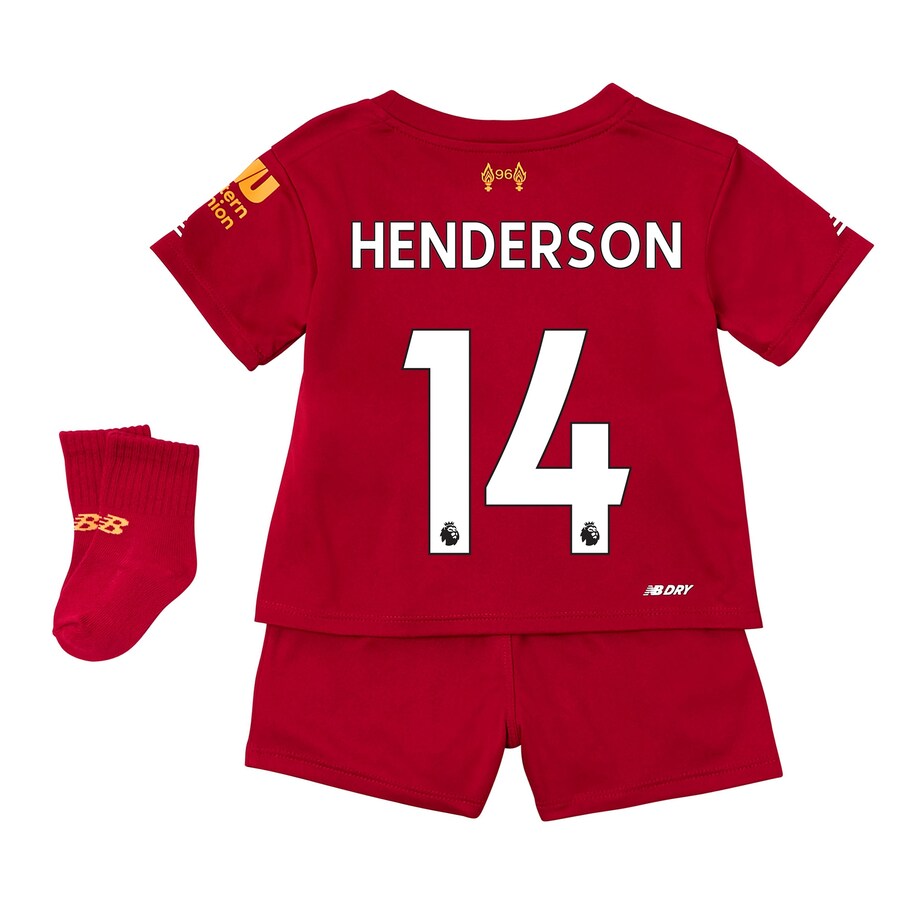 Get your young future champ showing their support for their favourite Merseyside club with this special edition strip!

The club captain sets an example to his players on-and-off the pitch and is the perfect role model for children of all ages.

Meanwhile, Sadio Mane has formed part of a formidable strikeforce with Salah and Roberto Firmino. The 61-cap Senegal international has scored 81 goals in over 100 games for the Reds so far.

Available for a reduced price, you will probably never get a better opportunity to get your hands on the perfect gift for any child!

Your infant will be following in Mane’s footsteps in no time at all wearing this mini home kit! Get the strip now while stocks still last, you do not want to miss out on this one.

If you didn’t find what you were looking for, why not try the Liverpool fan gifts page to find some more ideas!