Football Fan Cast is reader-supported. When you buy through links on our site, we may earn an affiliate commission.
2/9/2020 | 08:01pm

Since the Premier League was first formed in 1992, the English top flight has seen some of the greatest goalkeepers ever play the beautiful game on British soil.

It is fair to say fans have been spoilt for choice as the likes of Ederson, Alisson, Edwin van der Sar, Jens Lehmann, Peter Schmeichel and Petr Cech have all earned their stripes at some of the biggest football clubs in Britain.

For whatever reason, retro football shirts are all the rage at the moment. With that in mind we have decided here at Football Fan Gifts to choose the best Premier League retro goalkeeper shirts of all time for each team in the top division.

Disagree with our picks? Join the discussion in the comments section below! Arsenal have never shied away from something striking and this shirt is certainly no exception thanks to the star symbol which is almost impossible to miss.

This cult classic was worn by David Seaman during Arsenal’s charge to the Cup Winners Cup final for the second successive year. Although the Gunners lost to Real Zaragoza 2-1 in added extra time, it is simply too good to miss.

Some fans may be thinking this keeper kit looks like it came straight from the set of Robocop but rest assured this is the real deal. 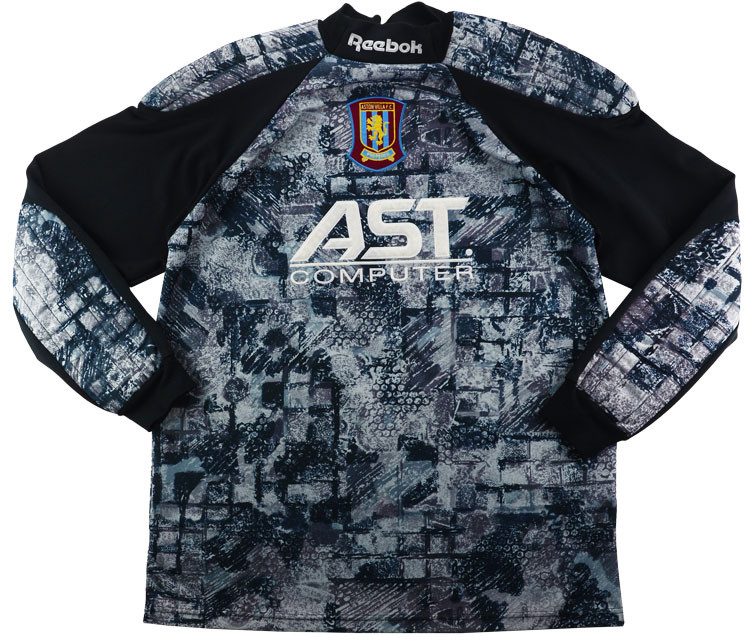 Show your support for your favourite club with this eye-catching strip!

Although Aston Villa aren’t exactly known for their innovation there is no denying the fact that this shirt is one of the coolest in the collection.

Look, we get it, Brighton were in Division Two at the time, but we’re going to make an exception on this occasion anyway.

Now that we have addressed the elephant in the room, it’s about time we get down to business.

Adidas are famous for supplying some of the best football kits for the world’s biggest teams and this is an absolute cracker.

You can never go wrong with green, which worked perfectly with the blue Phoenix Brewery shirts worn by the outfield players.

Rules were made to be broken and we couldn’t resist the temptation to do so once again. Burnley pulled it out of the bag with this orange top complete with a black trim. 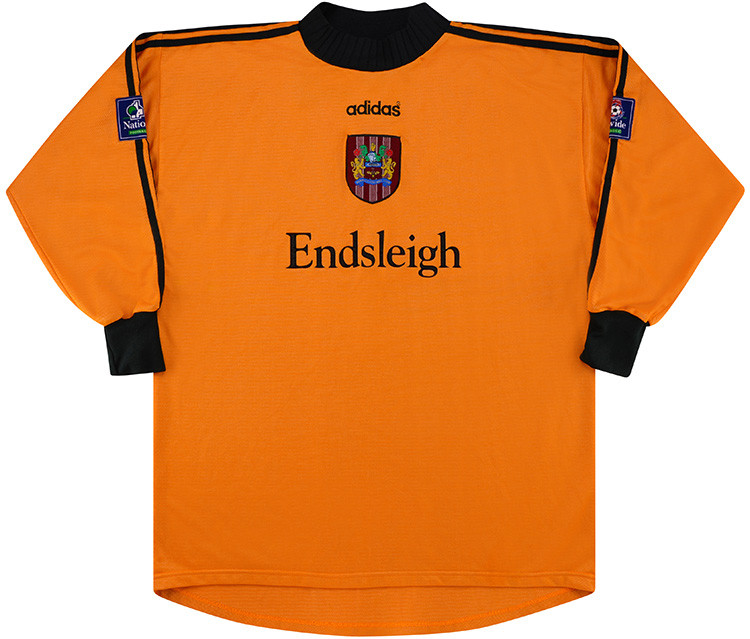 This player issue shirt is believed to have been worn by club stalwart Marlon Beresford in the FA Cup tie against Liverpool.

Made by Adidas, this is another banger, as the black collar and cuffs more than speak for themselves.

Complete with felt sleeve patches, the original Umbro printing, and coupled with an interesting design on top, this official Chelsea shirt appeared from out of the blue. The Autoglass logo is still visible for all to see while the tags are also attached as well. This classic shirt is the stuff of legends - Chelsea fans will not want to miss out!

Worn by Carlo Cudicini when Chelsea beat Villa in the last FA Cup final at the old Wembley Stadium, this strip has a very special place in the heart of every Blues fan.

The bright green colour may be too bold for everyone’s taste but it attracted the most attention and made for a refreshing change from the previous goal net print. 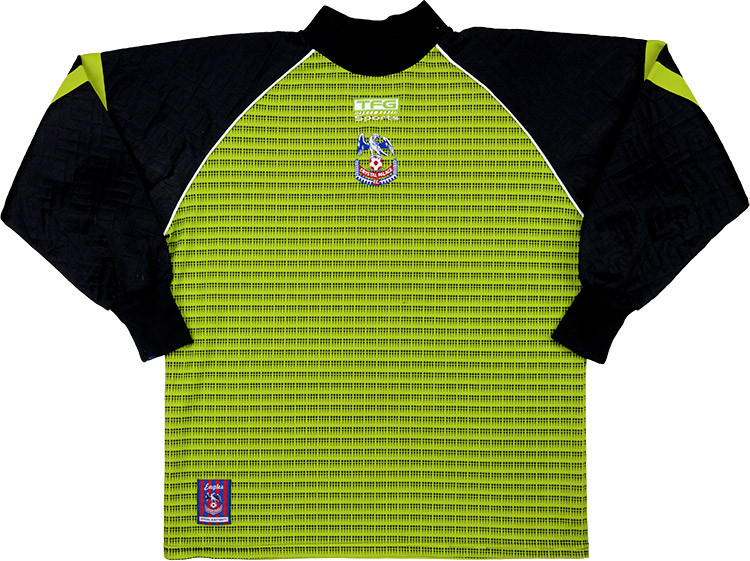 This kit is in perfect condition and is a collector's dream - you do not want to miss this one!

Some may say Steve Coppell performed miracles by saving Crystal Palace from certain relegation from the Premier League on multiple occasions but he couldn’t prevent the Eagles from plummeting to 15th in Division One.

Worn by club legend Neville Southall, this legendary kit is arguably the best of the bunch. Although there’s an awful lot going on, the different shades of green work so well with the black collar and cuffs. 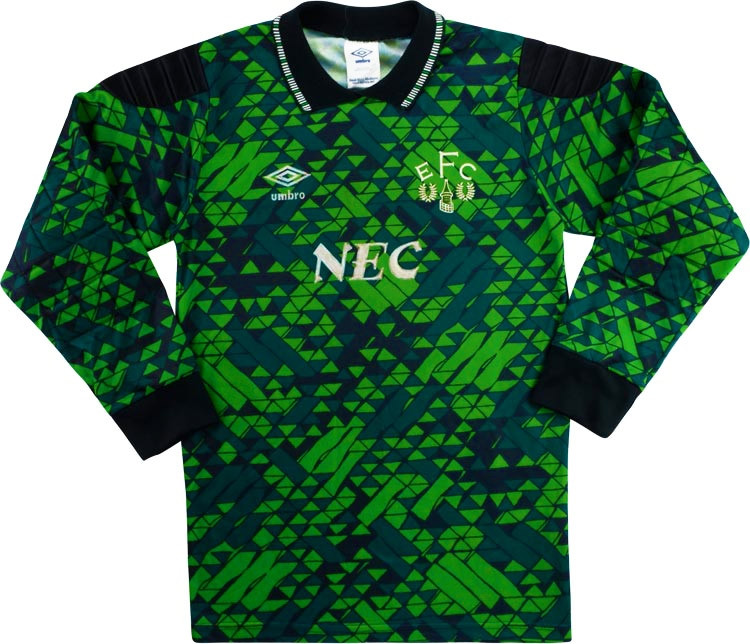 Prove you're a true Toffee wearing one of these stunning strips!

This classic design appeared during Howard Kendall’s second spell at Goodison Park. Get yours now!

First and foremost there is so much more to this Fulham kit than initially meets the eye. The logos are clean and crisp while the ‘Tron’ lines add that little bit extra.

Nike did a great job by producing one of the best goalkeeper shirts we have ever seen in the Premier League. Full marks from us.

You can never go wrong with a combination of green and yellow, especially when Puma have added a psychedelic pattern as well. This looks like it belongs on Bondi Beach.

Covered in bold and bright colours, this classic shirt is a thing of beauty, and is certainly a collector’s item.

While some may wonder why this shirt is on the list, the sheer simplicity of the design puts it in a league of its own.

The thin black lines form the perfect frame for the iconic LG logo with a black collar and matching cuffs.

Similar in style to its Fulham counterpart several seasons later, Foxes fans will remember this top the most for being worn during the club’s final season at Filbert Street.

Reebok really did do a great job with this Liverpool keeper kit. The home version is not too shabby either.

The green livery is covered in the iconic liver birds, the city’s famous symbol, and the white logos stand out brightly from the background. 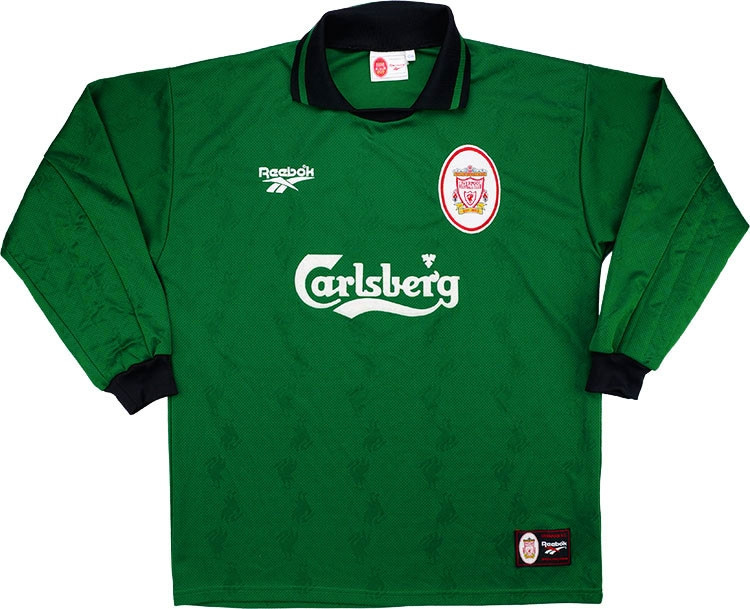 Plain and simple with a faint pattern underneath, this shirt has been kept in excellent condition for several years,

As you can see, the vintage kit is in near mint condition, and fans will not want to miss out on this one worn by legendary shot-stopper David James.

Before you start, let’s make it clear, we make the rules here at Football Fan Gifts. While we are pushing the boundaries ever so slightly, 2005 is still over ten years ago, and that’s old in our book! So, without further ado, this is simplicity at its finest.

Former England international David James and current Leicester City No. 1 Kasper Schmeichel both battled it out for supremacy between the sticks wearing this shirt during Stuart Pearce’s last campaign in charge at the Etihad. The least said about that season, the better, but there is no denying that this is one of the best-looking kits in the collection.

What a kit and what a story as well. While we are quite partial to a green-coloured strip (or several), the long black sleeves make this kit look even cooler. We can only assume the idea behind this design was to hypnotise Premier League strikers but boy, this is a brilliant distraction. Quality.

Sir Alex Ferguson’s Red Devils finished runners-up to Arsenal as his side fell short at the final hurdle despite the fact they had a superior goal difference and conceded less goals. Follow in Peter Schmeichel’s footsteps and get your hands on this unique look!

While some will say that this is best suited for the clubs of Ibiza, we have to give all of the credit to Adidas once again for creating such a masterpiece. Fans will never forget the fact that the Magpies came so close to winning the title that season.

Newcastle never really play it safe when it comes to football shirts of any kind, which explains why they can be so difficult to find, so make sure to pick up a piece of history before it is too late.

Not to be mistaken for a sherbet lemon, Umbro brought this shirt out for the Blades back in 1992.

While Sheffield United weren’t the only ones to be treated to such a fluorescent colour, as yellow became a popular choice after referees started wearing green instead of black, the south Yorkshire outfit stood out from their contemporaries with this cult classic.

Overall the kit looks like an old sweet jar with the recognisable ‘Laver‘ branding which is probably why it is so appealing.

This is without a doubt the best of the bunch. Southampton kept things simple with this shirt, using a combination of burgundy and dark blue to produce something that is quite remarkable.

And alright, it does look a bit like a rugby top but that is all a part of the charm.

Designed by the Saints themselves, this is the perfect gift for fans of all ages. Commemorate the club’s first season at St Mary’s by framing the shirt on a wall in the sitting room!

Forget Holsten, it’s all about halogen. The fiery finish is simply sublime and it works so well with the yellow shoulder pads.

These sponsored shirts are largely synonymous with Jurgen Klinsmann’s stint at White Hart Lane later on but we must pay particular attention to the other end of the pitch this time.

Erik Thorstvedt became the first Norwegian to win the FA Cup when he won it with Spurs wearing this shirt in 1991. As of right now, you may live to regret your decision if you let it go instead.

Although we will admit this West Brom shirt is on the cusp of being borderline retro, it is hard to argue it doesn’t belong in this list.

The traditional T-Mobile logo never looks old emblazoned across the front while the dark grey background brings out the brightness of the pink.

In fact this is another football shirt fans could easily get away with wearing every day. Well, maybe not every day, but you get the general idea.

The only bad news is that they are proving to be terribly elusive but when we do eventually find one for sale we will immediately let the Baggies know!

Turn up to Glastonbury and you are bound to spot some of the quirkiest football shirts still out there. Without a doubt this wavey West Ham kit will be easy to find.

As is often the case there is a special story behind this splendid shirt.

Printed by Pony, this psychedelic strip probably left many fans scratching their heads, but it really is a thing of beauty.

What better way to show your support for your beloved Irons than by wearing it at the London Stadium? Grab it now before it becomes too late.

We know, we know, this wasn’t technically worn in the top flight. However, it is simply too beautiful to ignore.

Blue and green always look great together especially with the added white trim around the collar and the long sleeves look smart and slick as well.

Admittedly, there is a tiny minuscule mark, although the overall condition of the top is very good indeed.

Wolves finished seventh in the First Division for two seasons in a row and fans should wear this shirt with pride.

For now this is what we have come up with, but whether or not there will be any drastic changes remains to be seen.

If you didn’t find what you were looking for, why not try the Best Premier League Retro Shirts Of All Time to find some more ideas!