Football Fan Cast is reader-supported. When you buy through links on our site, we may earn an affiliate commission.
26/1/2021 | 12:16pm

Take a trip down memory lane, where we will cover some of the most iconic and stylish, home and away Tottenham Hotspur retro shirts across the years. From Spurs’ infamous 1991 FA Cup Final shirt, to their 1986 home classic. Check out our top five picks worn by Spurs legends – you do not want to miss out on adding some of these to your retro shirt collection!

Tottenham Hotspur famously became the first English team to win the FA Cup for a record eighth time after defeating Nottingham Forest, 2-1 at Wembley. 80,000 spectators witnessed the 110th FA Cup Final in history, as Nottingham Forest made their first final appearance since their trophy win 32 years earlier. However, one thing notably stood out during the night and that was that this Tottenham Hotspur retro shirt was designed specifically for the match.

Spurs wore this immaculate slick shirt during 120 minutes of triumph and tragedy at Wembley. The Holsten sponsored shirt was manufactured by Umbro who took over from previous manufacturers Hummel ahead of the final. It has the qualities of a classic white Spurs shirt, though distinctly features a dark blue collar for the first time in the clubs history. The only previous collared shirts had been all-white, and this is one reason as to why this Tottenham Hotspur retro shirt really stands out from the rest.

This is one of the most memorable Tottenham Hotspur retro shirts from the rebranding of the Premier League in 1992. It was famously worn at White Hart Lane by the likes of Teddy Sheringham and Jurgen Klinsmann. This eye catching deep purple strip will always go down in club history – you surely must add this to your collection! 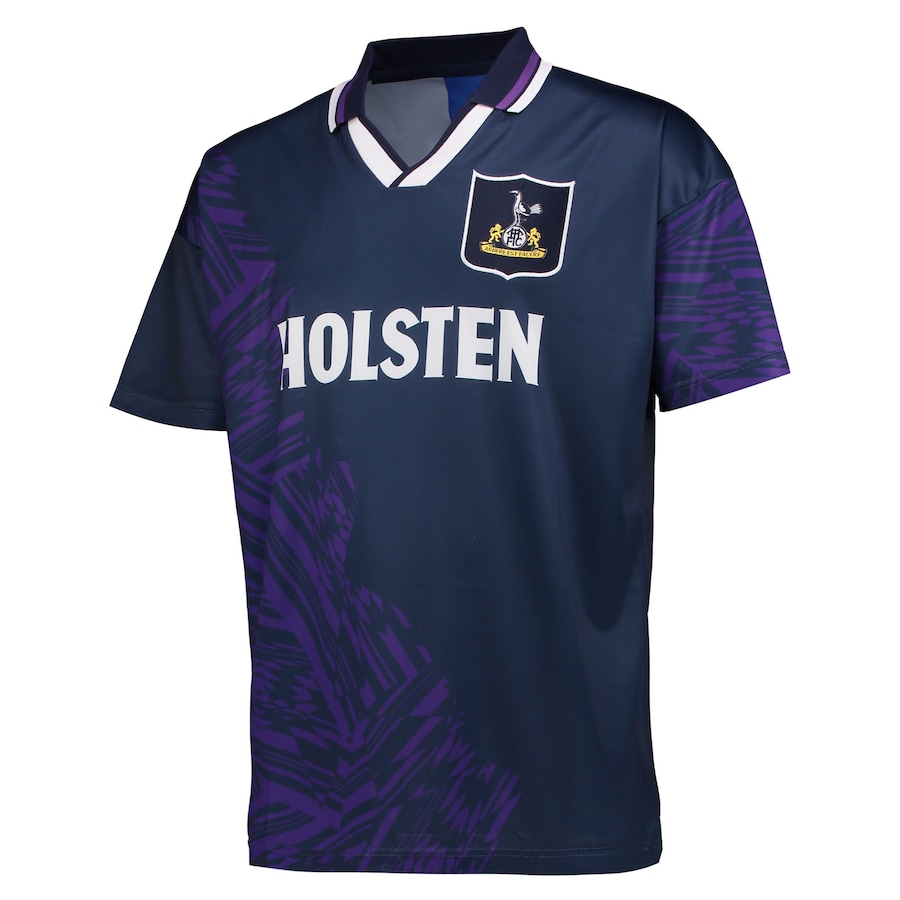 Take a trip down White Hart Lane in 1994 with this iconic Spurs shirt - worn by Teddy Sheringham, Gary Mabbutt and other club legends!

Now, this Tottenham Hotspur retro shirt is a piece of club history without a doubt! Famously worn by Glenn Hoddle in his last season playing at Tottenham, as Spurs chased all three domestic honours and Clive Allen scored an incredible 49 goals in all competitions, earning him the title of PFA Player of the Year. This shirt even features Spurs’ iconic sponsorship with Holsten! 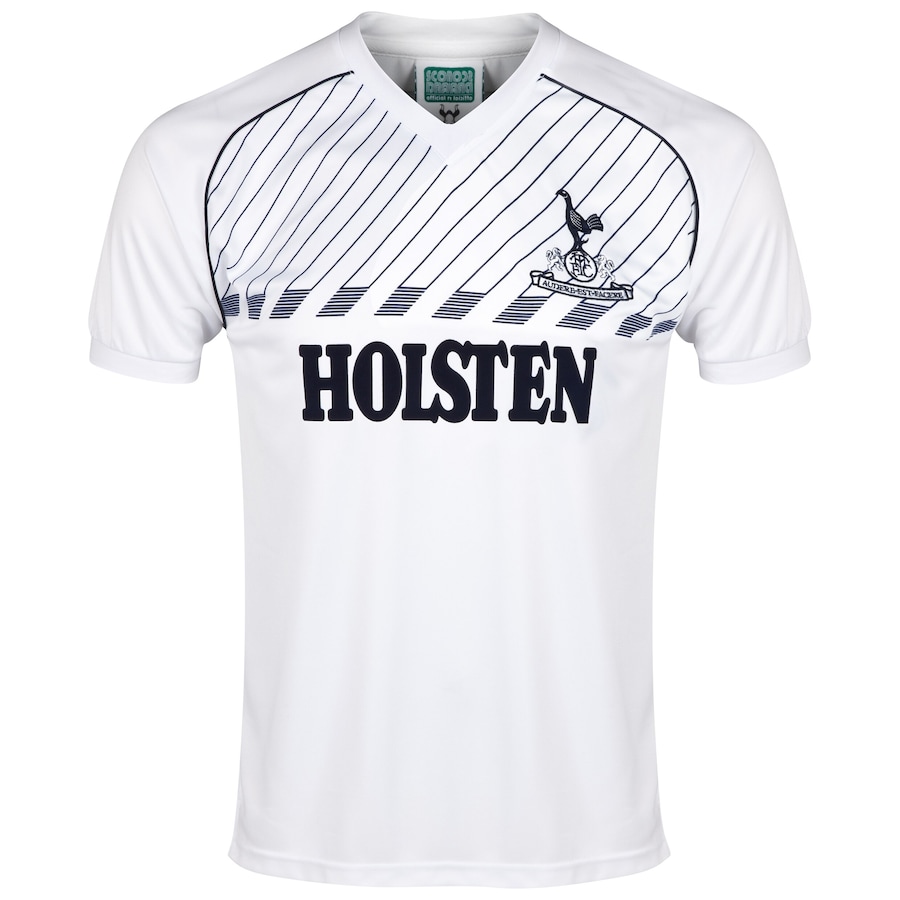 This Spurs shirt is so iconic, that is was even famously worn by the late Diego Maradona in 1986!

Fun fact: this shirt was iconically worn by the late Diego Maradona on May 1st 1986, during Ossie Ardiles’ testimonial game!

Certainly one of the most sleek-looking away Tottenham Hotspur retro shirts over the years is their away strip from 1983. This classic shirt will bring back many good memories for Spurs fans – worn in Keith Burkinshaw’s last season as a manager. This light blue shirt features the club crest and iconic Holsten logo adorn the front centre, in addition to a unique v-neck collar – you do not want to miss out on this one! 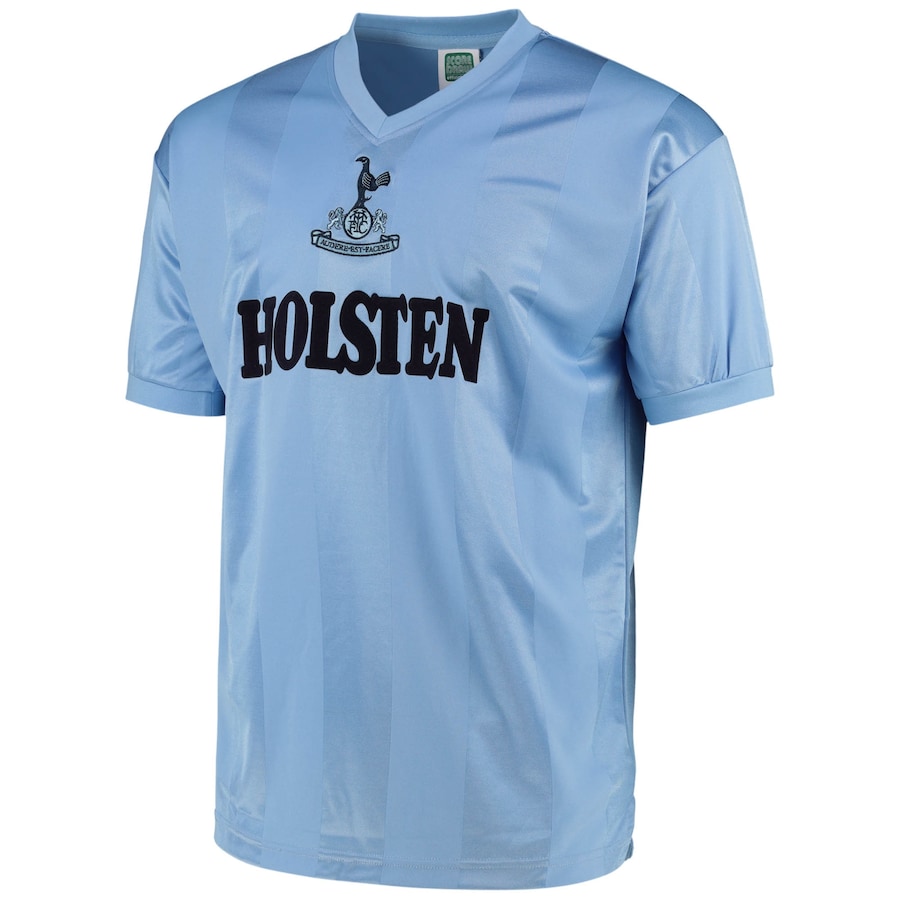 This 1983 Spurs away shirt is a timeless classic for sure! Featuring an unmatched light blue colour-way and the club's iconic crest in the centre!

Now, this is what you call an old-school Tottenham Hotspur retro shirt! This number is often overlooked and many younger fans may not even be aware of its existence till now. Worn by club legends, Glenn Hoddle and Ossie Ardiles during the Keith Burkinshaw era – this retro shirt is a MUST for all spurs fans. The unique features about this shirt are the open v-neck collar and admiral sponsorship across the neck/sleeve line. 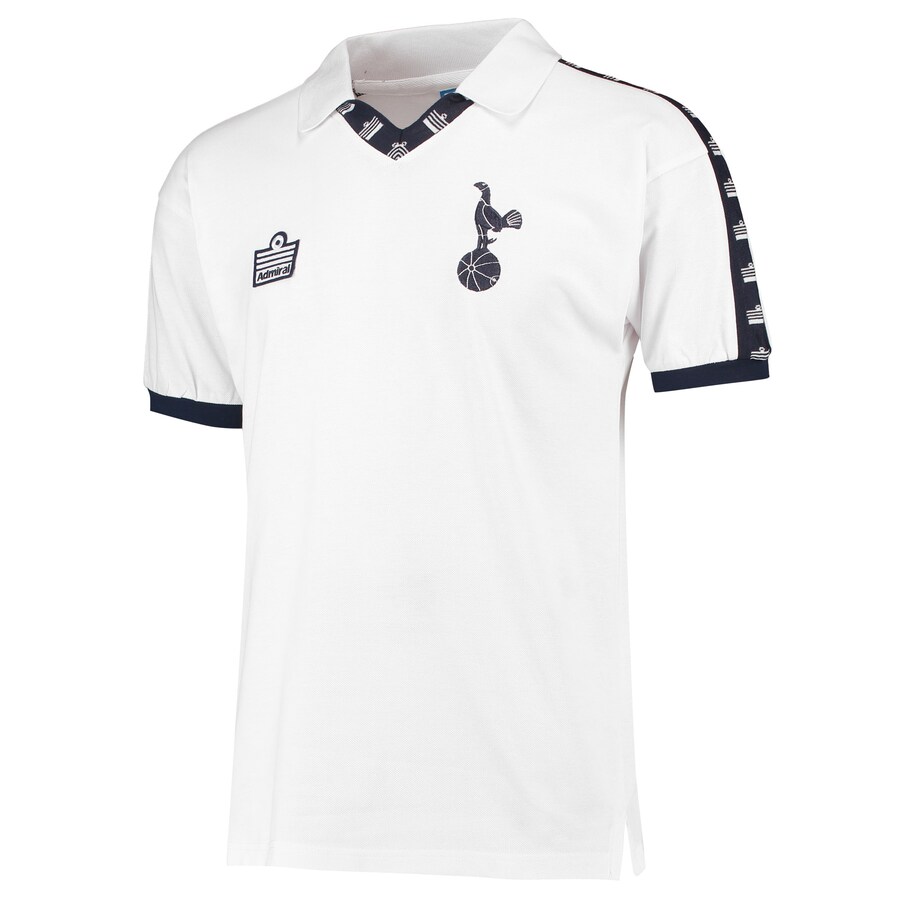 Simple, but effective. This Home Spurs shirt from the late 70s is a MUST add to you unique collection of club memorabilia!

It can be worn at the brand new Tottenham Hotspur Stadium on a matchday, or even be dressed up with a pair of jeans on a night out, that is what we love about this versatile shirt!