Football Fan Cast is reader-supported. When you buy through links on our site, we may earn an affiliate commission.
14/9/2020 | 11:00am

Liverpool FC waited 30 years to become Premier League champions but it was well worth the wait.

The Reds ran away from the rest of the chasing pack at the top of the table, leaving Pep Guardiola’s Manchester City trailing in their wake.

Now Liverpool will look to defend their title for the first time.

And Nike have given fans their first glimpse of their new partnership with Jurgen Klopp’s side.

The American sportswear company signed a new lucrative deal with Liverpool worth a reported $39.5 million per year.

It replaced the champions’ contract with New Balance after the club won a High Court dispute with the kit manufacturer last year.

As is often the case, all three Liverpool football shirts feature a ’96’ emblem encased in eternal flames on the nape of the neck, remembering the 96 children, women and men who tragically lost their lives at Hillsborough.

Liverpool fans will not want to miss out on the chance to wear the same patterns as their favourite players – get yours now while you still can!

At first it appears as though nothing much has changed from last term’s home kit.

However the latest Liverpool home shirt sports a classic v-neck collar with a teal and white trim in tribute to the club’s history.

The two colours have been taken from the club’s crest which has been watered down in recent years.

Eagle-eyed fans will also be able to spot the same subtle trim on the sleeves of the shirt.

Here at Football Fan Gifts we feel that this is a solid first attempt from Nike. Great job.

Nike have never been one to shy away from having some fun with some ground-breaking designs.

And this is where the fun begins.

The Americans have gone a little crazy with the Liverpool away kit but do you know what? We think it looks incredible. 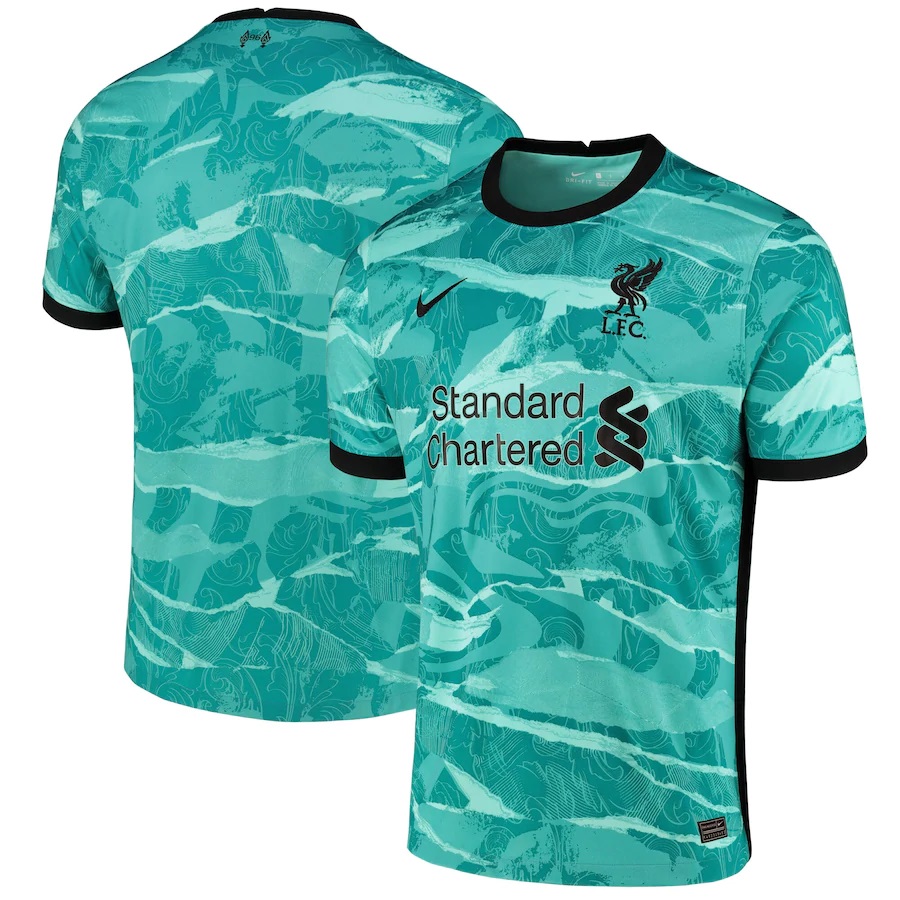 Show your support for your favourite club with this awesome Anfield away shirt!

The away kit is almost entirely teal, save for a black border around the collar and shirt sleeves, and a black stripe down the sides.

New Balance tended to play it safe with their strips so fans will be delighted to see that Nike have spared no expense.

It is blindingly obvious that this is heavily influenced by the liver bird, the official symbol of the city of Liverpool, and inspired by the iconic Shankly Gates, which are represented by the swirls and spirals that cover the entire shirt.

If you haven’t guessed it already, we’re a big fan of bright and bold designs, and this one certainly fits the profile. Full marks from us.

Last but by no means least, Liverpool have unveiled their third kit for the 2020/21 campaign.

The club claim it has taken inspiration from the historic European nights at Anfield.

And it is easy to see why as the black and grey checker board base pays homage to the chequered flags and banners that cover the Kop for every home game in European competitions.

If we are being particularly picky, the crimson side panelling is far too short for our liking.

It is only available for preorder at the moment but it will be released on general sale this week.

If you didn’t like the new Liverpool kits, take a look at our Top 5 Football Gifts To Buy Liverpool Fans This Year!