Football Fan Cast is reader-supported. When you buy through links on our site, we may earn an affiliate commission.
18/8/2020 | 05:50pm

This is the place to be if you are after some of the best retro England shirts to buy! Check out our top eight Three Lions shirts from over the years – home and away. Ranging from England’s iconic 1986 Mexico World Cup home shirt to the Three Lions unique third shirt from 1992. Worn by the likes of Gary Lineker and Alan Shearer – you can become a legend too by adding one of these to your retro shirt collection!

To kick things off with one of the most iconic retro England shirts, during the 1982 Spanish World Cup, the Three Lions wore this immaculate home shirt. The shirt famously features red and blue stripes across the neck, and it simply has England’s iconic crest printed on the left-side – simple, but very slick and stylish. 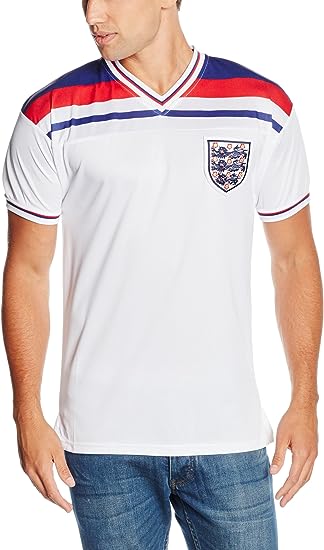 This retro England shirt will never go out of fashion, and it can be worn with a casual pair of jeans on a night out, or even dressed down with a tracksuit to relax in - perfect for all occasions!

This retro England shirt has a bittersweet story behind it, and is sometimes associated with a missed opportunity by England who actually went unbeaten during the 1982 World Cup, though were eliminated during the second group stage. The Three Lions breezed through their first group of the tournament, winning all three group games against France, Czechoslovakia and Kuwait to progress. Brazil were the only other team to win all three games in their group.

England drew both of their matches in the next round, while West Germany triumphed against Spain which allowed them to progress to the semi-finals, England were knocked out of the tournament as a result, despite the fact they went five games unbeaten and conceded just one goal.

If you loved England’s home shirt for the 1982 World Cup, then we are certain you will love their away strip for the same tournament. Their iconic white has been swapped out for their famous red away colour, and it perfectly fits along with the blue and white stripes across the neck. 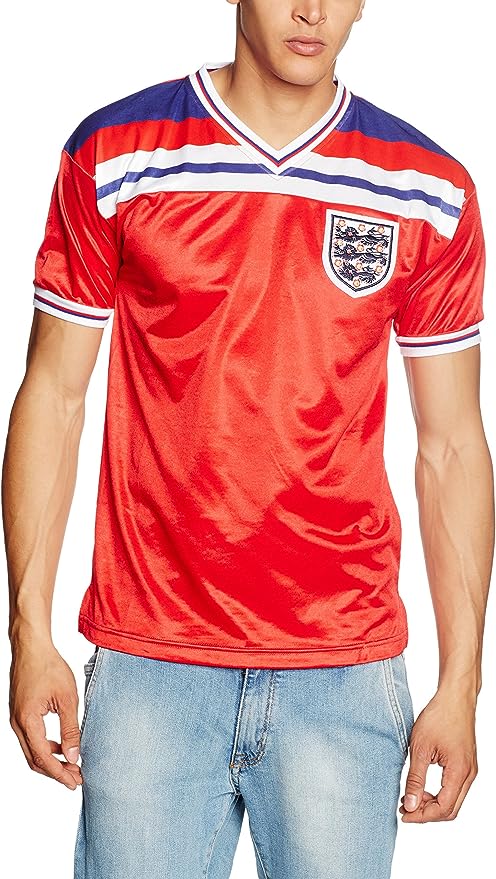 This is certainly a fan favourite, though it is not a retro England shirt which you see everyday and cannot be overlooked as an addition to your classic shirt collection by any means.

This shirt was worn in the opening group game of England’s World Cup, against France. The Three Lions famously went on to win 3-1 – conceding their only goal of the tournament. In addition this retro England shirt was worn against West Germany in a 0-0 draw.

Now this is what you call one of the most unique and special retro England shirts in history. This shirt was worn in 1992, by the likes of Gary Lineker and Paul Merson, in games against Spain and Czechoslovakia. At the time this shirt had mixed opinions from fans, and the design was not one which was commonly seen back then. Looking forward almost 30 years later however, this shirt was way ahead of its time and not appreciated as much as it is, looking back today.

It uniquely features England’s famous Three Lions patterned across the top of the shirt in a more animated way than usual. In addition to this, the shirt is a notable sky blue colour with subtle reflective stripes, and to complete this masterpiece of a shirt is the patterned “England” lettering across the shirt, as well as a dark blue collar which places this retro England shirt in a league of its own.

Moving on to another one of the best retro England shirts – this clean classic from the iconic 1986 Mexico World Cup. England made it to the quarter-finals of the tournament where they met winners-to-be, Argentina. England lost the game 2-1 with both of Argentina’s goals coming from none other than Diego Maradona, and his first goal became known as the “hand of God goal” which he famously scored by using his hand.

This incident was not spotted by any of the match officials as they did not have a clear view of play. Four minutes after this crazy goal, Maradona scored once again and his second goal was known as the goal of the century. Gary Lineker scored in the 81st minute but it was too late for the Three Lions who unfairly did not progress to the semi-finals. 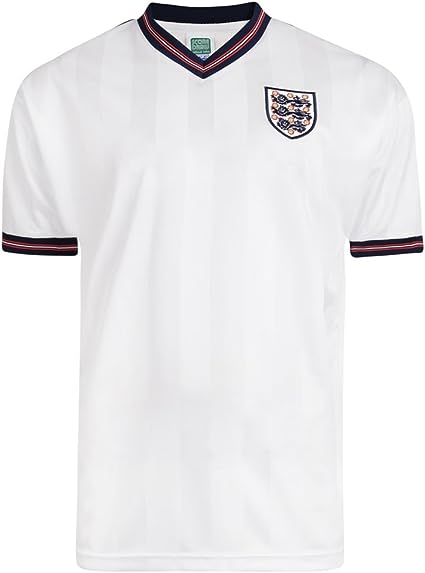 Do not miss out on your chance at wearing this retro England shirt at next year's European Championship - get yours here now!

It was not all bad news for England, as this famous shirt was worn by Lineker, who won the Golden Boot with six goals. This shirt is very simplistic, though this is not a bad thing. It can be worn at any occasion and is perfect if you are off to Wembley to watch the new promising Three Lions.

This away shirt certainly deserves a place in this top eight list of the best retro England shirts of all time. It features a unique red pattern across the shirt, and a slick sleeve pattern which also runs across the navy blue collar. Worn during the 1990 Italy World Cup where England once again famously reached the semi-finals. The Three Lions were matched up against West Germany in Stadio delle Alpi, Turin.

Over 60,000 spectators witnessed England take the game to penalties after an 80th minute equaliser by Gary Lineker to make it 1-1. Lineker, Beardsley and Platt all scored their penalties, but Stuart Pearce and Chris Waddle failed to find the back of the net to hand the victory to the Germans, who went on to beat Argentina in the final of the tournament.

Although England were unlucky on the pitch, you can be lucky enough to wear a piece of World Cup history with this iconic retro England shirt.

Another classic third shirt is England’s from the 1990 World Cup. This was the first blue shirt worn since the 1970 World Cup, and was worn against Turkey in a European Qualifying game against Turkey which the Three Lions went on to win 1-0. Dennis Wise famously scored his only international goal wearing this very shirt.

This retro England shirt really stands out from the rest of the crowd and is a must have for your collection, even if you are not the biggest fan of the national team!

It features a distinct blue pattern in different shades, along with the same sleeve and collar details as their red away shirt from the same year.

This has to be one of England’s most memorable away shirts as it was worn in Euro 96, hosted in England. The shirt features two shades of blue in a striped print, and the one feature which really stands out about this shirt is England’s crest printed in the centre – this is something that we do not commonly see on newer England shirts today. The European tournament took place in the summer of 1996, and it was the first championship to feature 16 finalists after UEFA decided to expand the tournament from just eight teams. 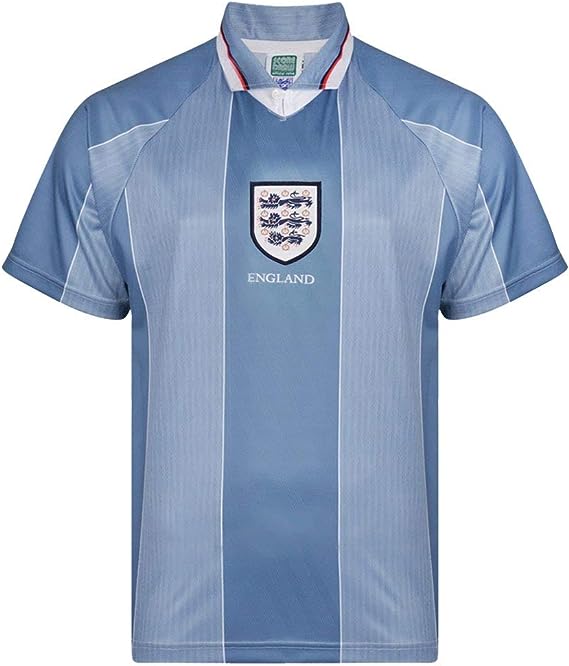 Gareth Southgate hopes to make up for his costly penalty with the new England team he is managing today - do not miss out on this classic retro England shirt.

This was also the first European Championship where three points were awarded for a win during the group stages. England reached the semi-finals of the tournament where they faced rivals and previous World Cup semi-final opponents, West Germany. The Three Lions got off to a great start with Alan Shearer opening the scoring just after three minutes. Stefan Kuntz equalised under 15 minutes later to put the Germans level however. The match went to extra-time, and Paul Gascoigne came ever so close to scoring the golden goal.

Both teams were unable to score during the additional time so the game went to penalties. Unlike the World Cup, England scored all five of their first penalties, but when it came to the sixth, Gareth Southgate had his shot saved, which allowed Andreas Möller to score the winner and win them a spot in the final where they went on to defeat Czech Republic.

The most recent retro England shirt on offer here is the Three Lions home shirt from the 1998 France World Cup. The crest was printed in the centre of the shirt once again which makes it that bit more special compared to modern strips. It also features navy blue and red details across the all-white strip, and the collar really stands out from other retro shirts. England progressed through the group stage after finishing second with two wins, though unfortunately for England, their World Cup hopes came to an end soon after, in the Round of 16.

Michael Owen won the young player of the tournament award wearing this retro shirt and who knows what you could may achieve wearing one of these!

They were matched up against bitter rivals Argentina and the game ended as a 2-2 draw after extra time. Shearer and Owen were the goal-scorers during the 90 minute before the match went to penalties. England did not have a great track record in penalty shoot-outs on the big stage, and once again they were proven to be an issue for the Three Lions. Argentina triumphed as 4-3 winners on penalties to knock England out of the tournament.

We hope you enjoyed our top 8 collection of the best retro England shirts on the market – if none of these caught your eye then be sure to check out our England football fan gifts section here!