Football Fan Cast is reader-supported. When you buy through links on our site, we may earn an affiliate commission.
16/9/2020 | 06:27pm

It’s a new dawn, it’s a new day and the Premier League is back in the full swing of things. Tottenham Hotspur have unveiled their brand new home, away and third kits for the 2020/21 season.

Tottenham renewed their kit supply deal with Nike not so long ago and the sports apparel giants have stuck to their guns with this season’s strips.

And the Lilywhites will now be looking to make amends almost immediately.

Daniel Levy has signed Matt Doherty from Wolves, Pierre-Emile Hojbjerg from Southampton and former England international Joe Hart on a free transfer from Burnley to show that he means business.

In fact the Spurs chairman has not stopped there as the Lilywhites continue to be linked to Real Madrid stars Gareth Bale and Sergio Reguilon in a sign of a real statement of intent.

Nike have made all the football kits with recycled polyester from old plastic bottles which they claim represents “a modern streetwear style, using exciting new colours and bold graphics.”

Tottenham fans won’t want to miss out on these football shirts because they could become very valuable in the future!

First of all let’s get this one out of the way. Nike have added a slight twist to the traditional white Spurs home kit which doesn’t work as well as they might have initially hoped.

The Spurs home shirt features blue sleeves with a yellow and blue collar and includes a stylish knit design – and that’s about it.

The club can’t seem to get rid of the bright red AIA sponsor that takes up so much space on the shirt.

And to make matters worse the blue armbands on the shoulders look utterly ridiculous.

Unsurprisingly it has received mixed reactions from Spurs fans.

Despite Mourinho’s protestations Bale continues to be linked with Tottenham. What better way to celebrate the prodigal son’s inevitable return than by buying one of these first team tops?

Again another misfire from Nike. As we said in our original piece, while the colour green is hardly a crime against humanity, it is just a bit boring, isn’t it?

However, we can understand what Nike were going for, as the away kit works well with the home kit.

Upon reflection the away shirt is not as bad as it first appears.

Indeed it is nice and simple with flashes of neon pink and yellow.

Get yours now while stocks still last.

Okay, now THIS is more like it! There aren’t many yellow kits out there this season but the Tottenham third kit is second to none.

It reminds us so much of so many famous Spurs kits in the past including this iconic 1991/94 away kit worn by Jurgen Klinsmann. 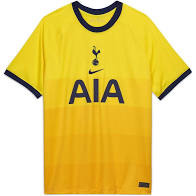 You could definitely get away with wearing this Spurs third shirt on Bondi Beach.

We actually feel this would work better as the away kit but you can’t win them all. This is definitely one for you if you didn’t like the other two kits.

If none of these caught your eye, check out our Top 5 Football Gifts To Buy Tottenham Hotspur Fans This Year instead!