The Red Devils have already secured a place in the top four and next season’s Champions League group stage, but they’ll be desperate to regain some momentum and form heading into next week’s Europa League final.

United take on Spanish outfit Villarreal in the showpiece event as they look to end the club’s longest trophy drought in over 30 years, however, they must first complete their final two Premier League games of the campaign.

Here’s how Football FanCast expects the Norweigan to line his side up on Sunday evening, with three changes from the side that started against Liverpool last time out… 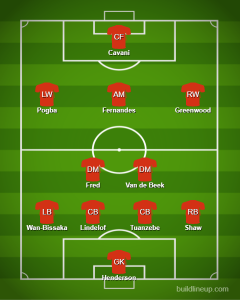 Dean Henderson keeps his place between the sticks despite a hugely underwhelming display against Jurgen Klopp’s charges where he made multiple mistakes and conceded four goals.

There’s one change along the back four, with Eric Bailly dropping out for the highly-rated Axel Tuanzebe. The 23-year-old has struggled for game time this season, but with Harry Maguire struggling with injury and United conceding six goals in their last two games, the youngster may get another chance to impress.

Will United win the Europa League?

In midfield, summer-signing Donny van de Beek may be handed his second start in United’s last three games against an already-relegated Fulham side. The former Ajax man has only featured from the off on three occasions in the league this season, and the visit of Scott Parker’s struggling side could be the perfect opportunity to get some more minutes under his belt.

The forward positions are occupied by the usual suspects, but with the £76.5-rated Marcus Rashford continuing to play through the pain barrier, Solskjaer may be tempted to axe his star forward with one eye on the Europa League final.