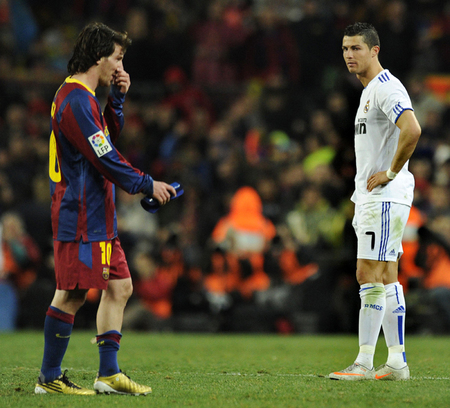 “A dynamic force is a very terrible thing” –Stanley Baldwin

A few months ago Tim Vickery’s blog sparked a crisis. He highlighted that, as with anything worth loving in life, an entity’s greatest asset doubles as its greatest shortcoming. I’d started writing this a while ago – after Ujfalusi injured Messi when Atletico met Barcelona back in September in fact. It was a selection of Madrid’s support cheering passionately and ridiculing the tearful Argentine as he was stretchered off the pitch that depressed me; the double edged sword of passion in football.

Passion is what it’s all about, right? It is the same passion that keeps so many stadia filled and teams supported which regularly transmogrifies into hateful invective for opposing players and (underscored by the Messi incident) perverse pleasure in others’ misfortune. As the Germans say, ‘die reinste freude ist die schadenfreude’.

But this wasn’t enough at the time and it certainly isn’t anything new (fans boo two types of players: the ones they hate and the ones they fear. Invariably, the two conflagrate) so I left the opening unfinished. And then Barcelona destroyed Real at the end of November. So it was sitting on my own after the match that provided the necessary paragraphs after the initial inspirational false start.

I recognise Barcelona’s greatness – actually I, like most, probably won’t fully appreciate the stratospheric standard that the Catalan club have consistently met under Pep Guardiola until it’s over. But the match simply confirmed everything that the last three years has built toward; they’re a great team. Their squad is comprised of multiple league winners, Spanish Cup winners, Super Cup winners, World Club Championship winners, Champions League winners, European Championship winners, and World Cup winners. It’s a palimpsest of future history. And it has been led by a gentleman who conducts himself as just that; a gentleman.

But we knew all of this already because, unfortunately, even greatness can become monotonous. A record sixteen consecutive La Liga wins isn’t the kind of newsworthy sockdolager that, say, them losing their next match would be. Cristiano Ronaldo surpassing the legends that are Alfredo Di Stefano and Ferenc Puskas to become the fastest Madridista to reach 50 La Liga goals over the weekend probably won’t turn as many heads as his Armani TV spot. It is simply the nature of any dynamic force that is followed so ubiquitously, and unscrupulously, to substitute perspective for hyperbole; reason for sensationalism.

What the drubbing at the Camp Nou did provide – probably more substantial than simply confirming Barca’s excellence – was an indicator of the gargantuan task that Jose Mourinho faces. For a manager whose recent career has hinged on an inhuman capacity for immediate delivery, the loss unearthed a simple fact that he has probably not had to face yet: his direct rivals in the league are the better team. To quote ThisisFutbol‘s Spanish football blogger, Daylight Robbery, in the aftermath of the season’s first El Clasico:

“1) Madrid lack leaders within their squad – that unifying spirit. As a tactically adept coach he has united their techniques but not their spirit. Last night showed that and Mourinho himself was not emotional, he kept himself distant. This was the man who broke down on Materrazzi’s shoulder and wept uncontrollably. The club’s failings have been too grand for too long for one man to remedy straight away. Madrid’s name glistens in the lights but the spark does not burn in the heart. Mourinho realised last night that he has to not only topple a superior side but restore the soul of Real Madrid.

2) Within that is the subplot of the relationship between Jose and Ronaldo. Aside from his one error [pushing Guardiola] Ronaldo was becalmed. Less keen to play pantomine villain even. He slipped quietly into the night. The one observation I have made is that while Ronaldo’s standards have not slipped since he left United, he hasn’t had a sense of belonging, a father figure to guide and improve him. For both club and country – isolated by weak personnel and tactics – he has taken the burden of failure upon himself in an almost solo crusade, which in turn has made any failure more scrutinised. Jose has to bring that force of ambition and desire into the soul he is creating. Ronaldo once celebrated United team-mates scoring the same as his own – he doesn’t have that attachment at Real as it is a hollow club. Mourinho’s quest is inextricably linked to and symbolised by his relationship with Ronaldo.”

Words I have to agree with. This is a unique circumstance for the Portuguese coach and time is a commodity diminishing at a rate inverse to the level of pressure that mounts at his doorstep. He has until April 17th to maintain an impeccable record and challenge Barcelona in the Copa Del Rey final – the first time in nearly twenty years that the two teams will contest the country’s domestic cup.

Less than four full days later his incomprehensible nine-year unbeaten home record, spanning four clubs and 147 matches, will be given its greatest test. It is actually fitting that Mourinho’s personal record (if still intact at that point, which I’m guessing it will) be threatened by the greatest obstacle standing between his team and success. But don’t let the dynamic force of hysterical sporting sensationalism surrounding two derby matches in four days fool anyone: irrespective of who wins Barcelona remain a great team at the peak of their evolution, Mourinho a distinctly special manager, Madrid a team very much in the making, and two intergalactic talents – Messi and Ronaldo – who typify the contrasting beauty that this game can offer. Let’s just try to enjoy it without the ultimate desideratum being a temporary place in history.