Is this Aston Villa star currently at a cross roads?

Remi Garde confirmed last week that Jack Grealish will not be in the squad for visit of Watford in last weekend’s vital game in which Villa succumbed to a disappointing 3-2 loss.

The emergence of pictures of Grealish has once again propelled him into the spotlight for all the wrong reasons, and opinion on this matter seems to divide supporters massively. However, Garde has labelled his behaviour as ‘unprofessional’ and has taken decisive action accordingly.

From what I can see, there are two main ways of looking at it; firstly, he is a 20-year-old kid and he is doing what any kid should be doing at that age. Secondly, he is a professional footballer and should act as such.

However, there are many other factors involved in this, and I have to say I am completely behind Garde in his decision to banish Grealish for this game.

Over the coming weeks, possibly even days, we are going to find a lot out about what sort of character Jack Grealish possesses. None of us know him personally and so we can’t judge. However, I am concerned that there is a spoilt kid mentality about him and I hope that is not the case, as his career will ultimately never reach it’s potential if so.

Garde is obviously unimpressed so far with Grealish. The assessment that Grealish has skill and quality but is ‘unfinished’ is absolutely fair and spot on.

Having dropped Grealish for his first game in charge against Manchester City, Garde, perhaps surprisingly, recalled him for the next game against Everton. There was an obvious message; don’t think you’ve made it already, but here is another chance.

Garde was obviously looking for a reaction in the Everton game, yet Grealish failed to deliver and didn’t work anywhere near hard enough. That isn’t to single the lad out or lay the blame solely at his feet. Yet, despite a challenge from his manager and being given a chance to come back in, Grealish failed to seize his opportunity to prove his point to Garde.

Now, on top of this, the story emerges of Grealish being out on the pop in Manchester on Saturday night and again on Sunday in a Birmingham hotel. Whilst there are no pictures of him partaking in anything, the Daily Mail video and images that came out certainly suggests he is not sober. Not by a long way.

Villa fans are sick to death of having their weekend’s ruined every single week for the last four months. Personally, the last thing I want to see is any of our players jollying it up, especially straight after such an embarrassing performance and especially when we are in the midst of a run of five points from our opening 14 games.

The argument is that he is a 20- year-old kid who is entitled to live his life still.

Wrong. He isn’t just a 20-year-old kid. He is a professional footballer for Aston Villa F.C. His age is completely irrelevant. He isn’t a youth player, or just breaking through any more. He is an established first team player. £20,000-a-week is the price for not living life as an ordinary 20-year-old and getting smashed at weekends. At least during the season.

Whilst I do think he is getting unfairly targeted by the press, he has to realise now that his card is marked due to him having talent and being fairly high profile, in terms of a potential hope for English football. The previous incident involving him this summer is something I don’t want to re-visit or link to this as I believe, off season, he is entitled to do what he wants – within reason, of course.

He has been tarnished by that whole episode, however, and then with the whole ‘hippy crack’ nonsense, which was dug up by the press going even further back in time to get mileage out of the story. Grealish needs to be way cleverer than letting them control the image that is portrayed of him.

Garde may get pelters from some sections of supporters for banishing Grealish, but this kid needs some discipline. I think it’s probably come as a shock to him, to have Garde not completely flailing over him in the way that Tim Sherwood did. It was telling when Grealish posted this on Twitter when Sherwood was sacked. 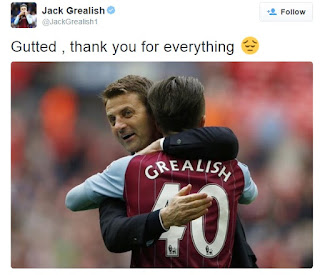 It would’ve been interesting to see how Sherwood had handled this latest breach by our young playmaker, but you can’t imagine him taking a hard line. Rather, a nudge and a wink and a ‘don’t do it again’.

Maybe that is how to get the best out of Grealish, but long term it isn’t doing him any favours, and Garde is right to try and begin instilling some discipline, both in Grealish and around Villa Park in general.

It’s been too long in coming and whilst it may put some people’s noses out of joint, professionalism is absolutely key and he’ll soon find out which players he can trust and which he can’t.

Grealish would’ve been in no state for training on Monday morning, and thinking he can wing it is simply not good enough. Whilst a 20-year-old can probably run off a night out or two fairly easily, Grealish needs to realise that supporters are counting on him to be in peak condition and totally committed in helping our club, his club, out of this mess.

It will be very interesting to see how Grealish responds to this. We can’t afford any sulky and stroppy immaturity. He needs to become a man, and show some determination. And quickly. I’ve said in previous posts that we, as supporters, are now expecting more from Grealish; more goals, more assists. At the moment he is standing still in his development.

I personally think Garde is spot on this time. He hasn’t fined him or gone over the top in his punishment. But a breach of club rules and procedure simply cannot be left to go without consequence.

The next step is now up to Jack Grealish and every single Villa supporter is hoping for a positive and mature response rather than a potential personality clash with Garde.

Any thoughts or comments? Please let me know here or @lovespud83!

This article was submitted via our new Write For Us feature. Think you can do better? Submit your own article via the link below, and make sure you follow @FFC_WFU on Twitter for #RealOpinions…

Article title: Is this Aston Villa star currently at a cross roads?