Each week our friends at Total Football Analysis Magazine provide us with in-depth tactical analysis. Today, TFA Lead Analyst Lee Scott looks back at Thursday night’s big clash at the Etihad Stadium and explains exactly how Man City were able to beat Liverpool.

Despite being relatively early in the season this was billed as the biggest game domestically in months. Over the Christmas period, Liverpool had opened up a seven-point advantage over Manchester City at the top of the Premier League and a win in this match away to City would see Liverpool go ten points clear of the champions entering the second half of the season.

This was not the first time that these two sides have met this season, the earlier encounter at Anfield saw the two sides play out a tactical 0-0 draw, an encounter which lacked much of the attacking creativity that we have come to expect from these sides and their respective coaches.

This time though there was a definite sense that Manchester City could not afford to drop points from this match. Their coach, Pep Guardiola, is known for his obsessive tactical preparation for big games although in recent seasons he has found Liverpool under Jurgen Klopp difficult to break down.

There were many questions in terms of team shape and selection prior to this match, particularly around Liverpool. In recent weeks we have seen a shift in their tactical structure away from the more traditional 4-3-3 to a 4-2-3-1 with a double pivot in the midfield. With City likely to line up in their 4-3-3 shape as normal, however, it was interesting pre-match to note the speculation that Liverpool would do the same to match-up with them.

In the end, City came away with the positive result that they needed, how they achieved this deserves closer examination though. 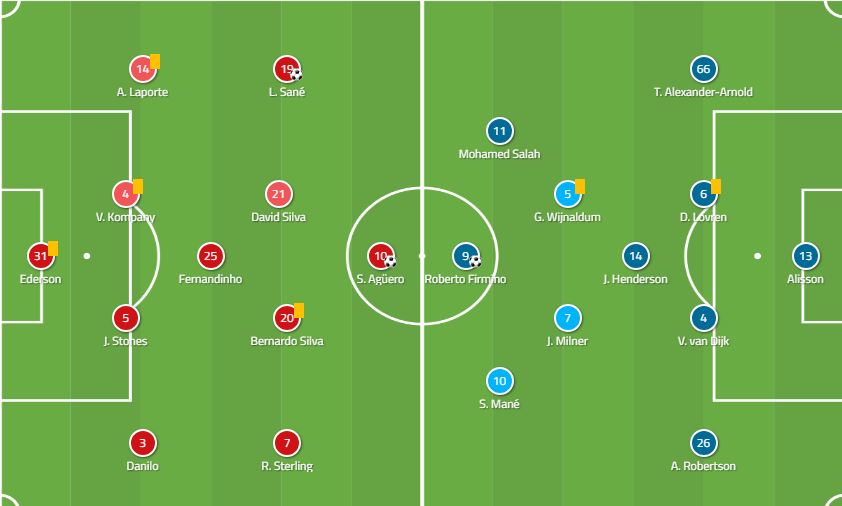 The first thing of note was that Klopp decided to move away from the 4-2-3-1 that has been so successful for him over the last few weeks. He switched to the more commonly used 4-3-3 in order to match systems with Manchester City.

The main difference in this switch of system saw a change to the midfield configuration. In previous weeks Fabinho and Giorginio Wijnaldum had formed an extremely effective double pivot at the base of the midfield. This created the base for Liverpool’s attacking phase and shielded the defence effectively in the defensive phase. In this match, we saw the return of Jordan Henderson playing as the single pivot with James Milner and Giorginio Wijnaldum ahead of him. As the match progressed the issues with this midfield three became hugely apparent.

Who has the loudest fans in Europe? PSG certainly state their claim in the video below…

With Roberto Firmino moved back to his more common striking position we also saw Mohamed Salah shifted across to the right-hand side of the attack with Sadio Mane providing balance on the left.

The most striking piece of team news from Manchester City was the introduction of the immensely talented Vincent Kompany in the defensive line. There was some speculation before the match that this would see a back three from City but instead, Aymeric Laporte was deployed as a traditional left-back, from where he could man mark Salah.

In the midfield, the return of Fernandinho at the base of the midfield would make a significant impact on the match.

It is one of the oldest and most widely understood tactical concepts of football but controlling the centre of the field is essential when controlling a match. Overloads and underloads in key central areas can provide key pressure points on your opposition which can lead to breakthroughs in possession.

Despite neither side having a numerical advantage in the 3v3 in the centre of the field we still saw City create positional and qualitative advantages by using intelligent movement from their two more advanced central midfielders. They had clearly defined roles for the midfield players with Fernandinho providing the base and controlling the space while Bernardo Silva and David Silva dropped in and pushed out of pockets of space across the central areas. This approach created passing angles that allowed City to progress the ball through the centre relatively comfortably.

The Liverpool midfield struggled to cope with the vertical movement from the two City central midfielders for the entire game. Here Liverpool were relatively well set defensively but as the ball was circulated from Kompany to John Stones across the defensive line it was comfortably moved through Fernandinho at the base of the midfield to Bernardo Silva, who had dropped away from the marking Liverpool midfielder to receive in space.

The same could be seen from the above situation that occurred on the opposite side of the field. Again the phase that I chose to highlight started with Kompany in possession on the defensive line. This time Liverpool were better orientated to press the ball and the circulation across the defensive line was cut off. David Silva made a sharp move towards the ball to create separation from his marker. As soon as the ball was moved vertically to David Silva, he bounced the ball out to Sane wide on the left.

As David Silva made his move to drop off he immediately affected the marking Liverpool player – as that player moved to shadow the run he created a space in the defensive structure that could be exploited by City. In playing the ball immediately to the outside, City created isolation against the Liverpool right-back, Trent Alexander-Arnold. This, in turn, allowed Leroy Sane the flexibility to attack the inside or outside of the full-back.

Isolating and overloading the weak link

With Joe Gomez still out injured Klopp has turned to the Croatian international Dejan Lovren to partner the excellent Virgil van Dijk in the centre of the backline. Before Thursday, this change hadn’t been overly noticeable, until they came up against a world-class opponent in Manchester City.

City used clever positioning from their forward, Sergio Aguero, to pin Van Dijk in place while passing combinations and movement from their wide forwards and advanced central midfielders isolated and overloaded Lovren.

With the ball possessed here by Laporte on the left-hand side, we saw aLiverpool side that were relatively well set defensively. The orientation of the ball dictated the type of movements from City in the final third of the field. As Leroy Sane maked a vertical run on the outside of Lovren, we saw David Silva move to occupy that space. This movement isolatedLovren and allowed the ball to be played around the outside to meet the run of Sane.

Initially, in the move Aguero pinned Van Dijk in place but as the run and pass was made he made an angled burst to attack the blind side of Lovren in the penalty area.

We saw a similar movement pattern here although on this occasion the starting point of the ball was with Raheem Sterling on the right-hand side. City have the capacity to play quick and short passing combinations in this area to play through the lines, but they mixed this up with direct passing to switch the play to an area in which they had isolated an opposing player.

As the ball was switched in this area out to the left-hand side, Alexander-Arnold moved out to engage the ball, while the advanced central midfielder on that side, David Silva, moved vertically to attack the space outside of Lovren. Once again this run is  accessed by a vertical pass played around the corner. As the ball was played through to Silva, Aguero once again made the diagonal run from his position on Van Dijk to attack the blind side of Lovren in the penalty area.

Over the course of the 90 minutes, there was little to choose from between these two sides. Liverpool were perhaps less potent in the attacking phase than they have been recently but they were forced to think and adapt so much when defending that playing quickly in transition became more difficult.

Manchester City were clearly prepared to execute certain mechanisms within their attacking phase and they did so superbly. The timing and use of overloading runs to isolate Dejan Lovren gave the Liverpool defensive structure issues throughout the match.

For the neutrals, this was a great game and a great result – the title race is very much still alive.

The FA Cup Third Round weekend is traditionally one of the best weekends in the English football calendar. Many Davids meet their Goliaths and totalfootballanalysis.com will be analysing many of this year’s Third Round fixtures.

Because the FA Cup is such an occasion we have decided to honour it by offering you 10% off ALL ANNUAL SUBSCRIPTIONS to Total Football Analysis Magazine this weekend only.

Simply click on the poster (on the left) and head straight to the checkout and enter the code “FACUP” to get 10% off your annual subscription to the magazine that Premier League analysts and coaches all the way down to grassroots level are raving about.

If you want to understand what is really happening on the pitch then this is the magazine for you.